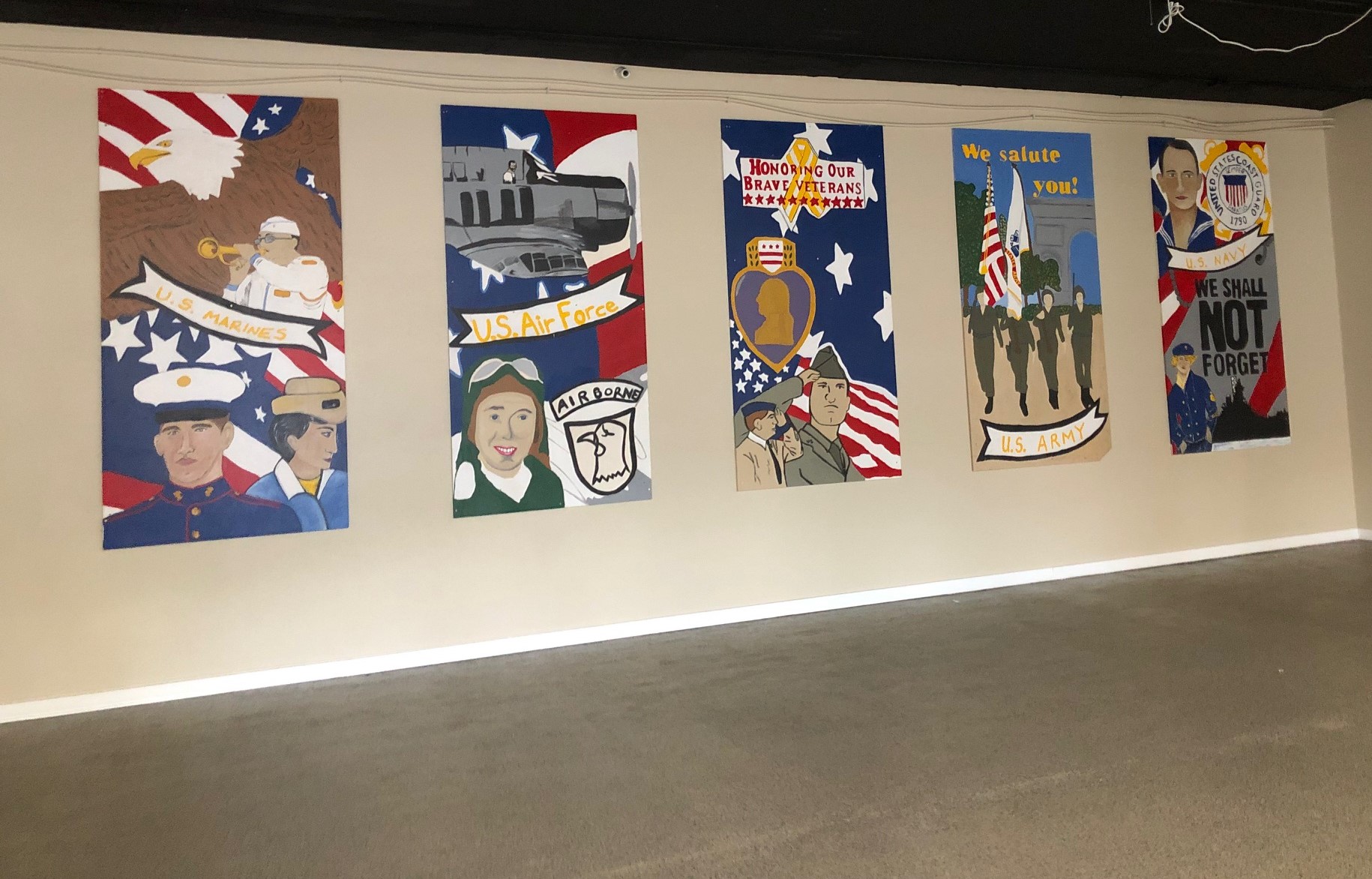 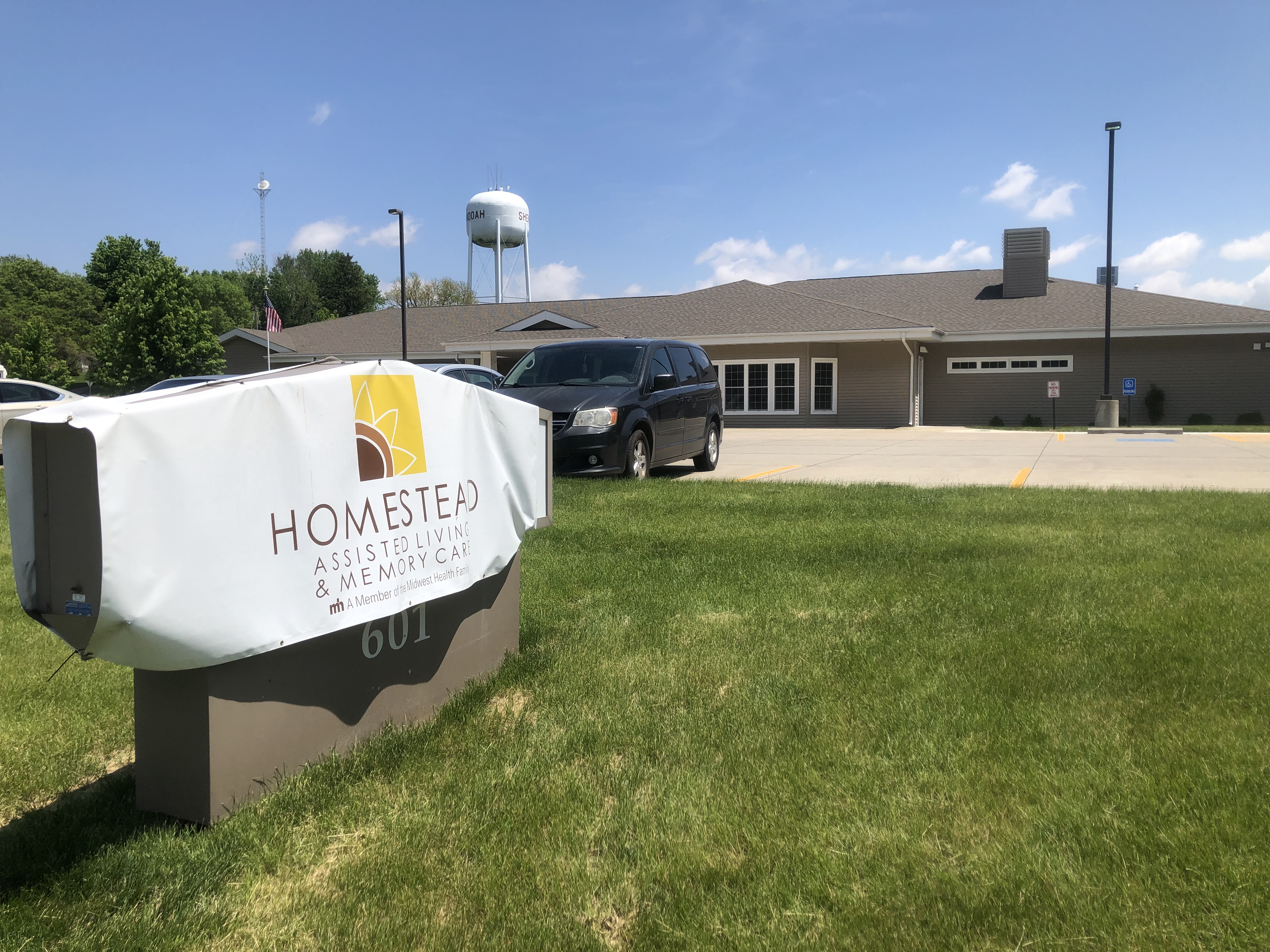 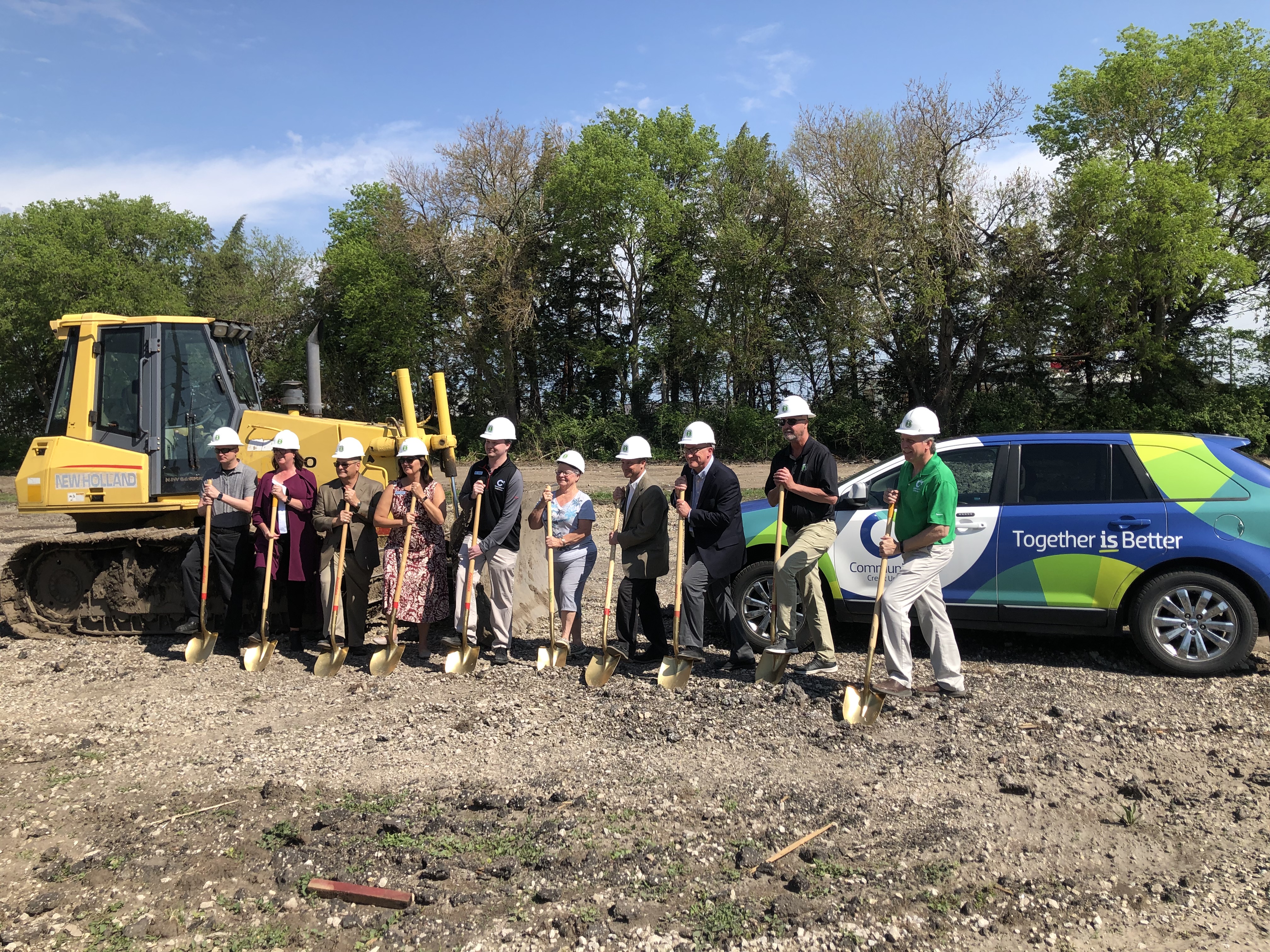 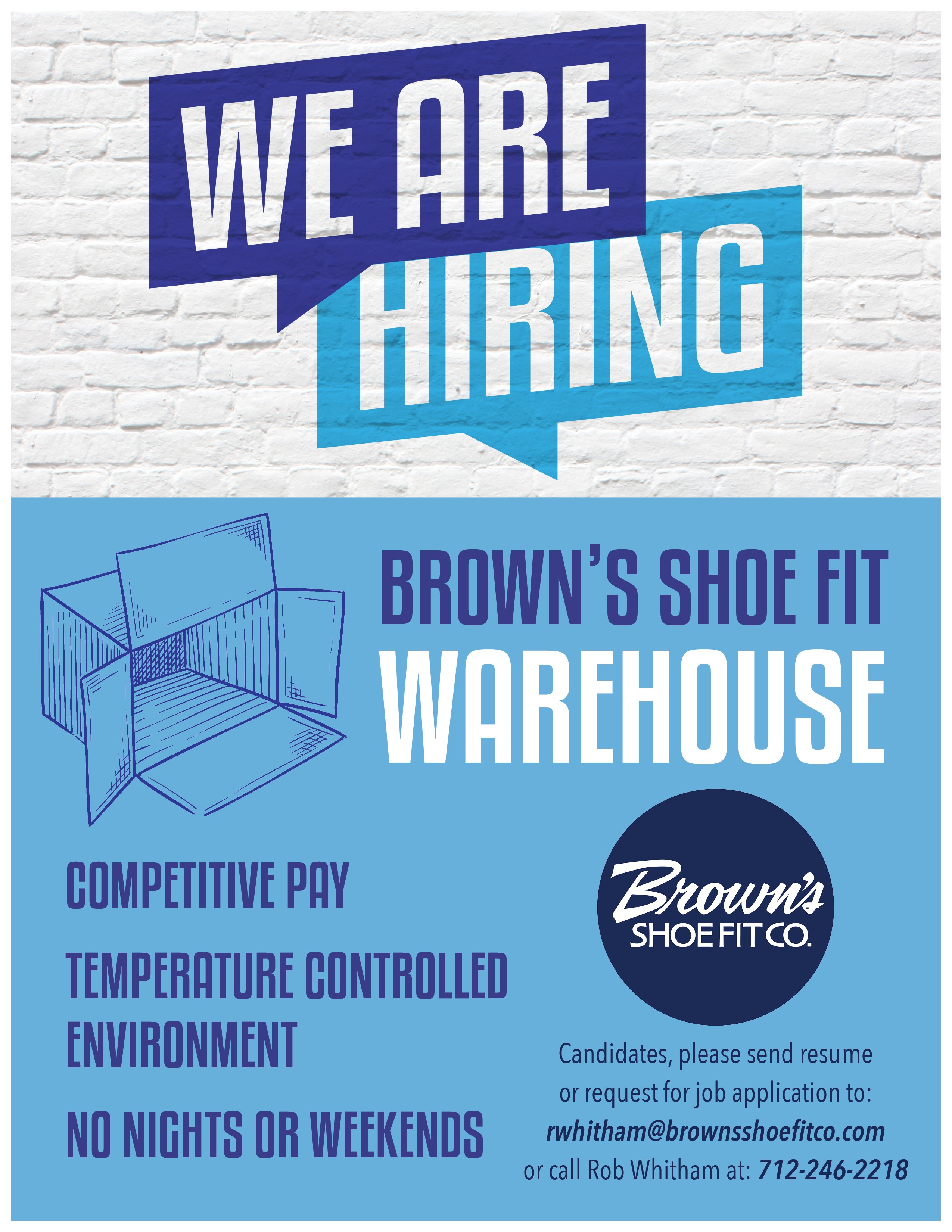 Thirsty Thursdays at the Depot- Music and BBQ 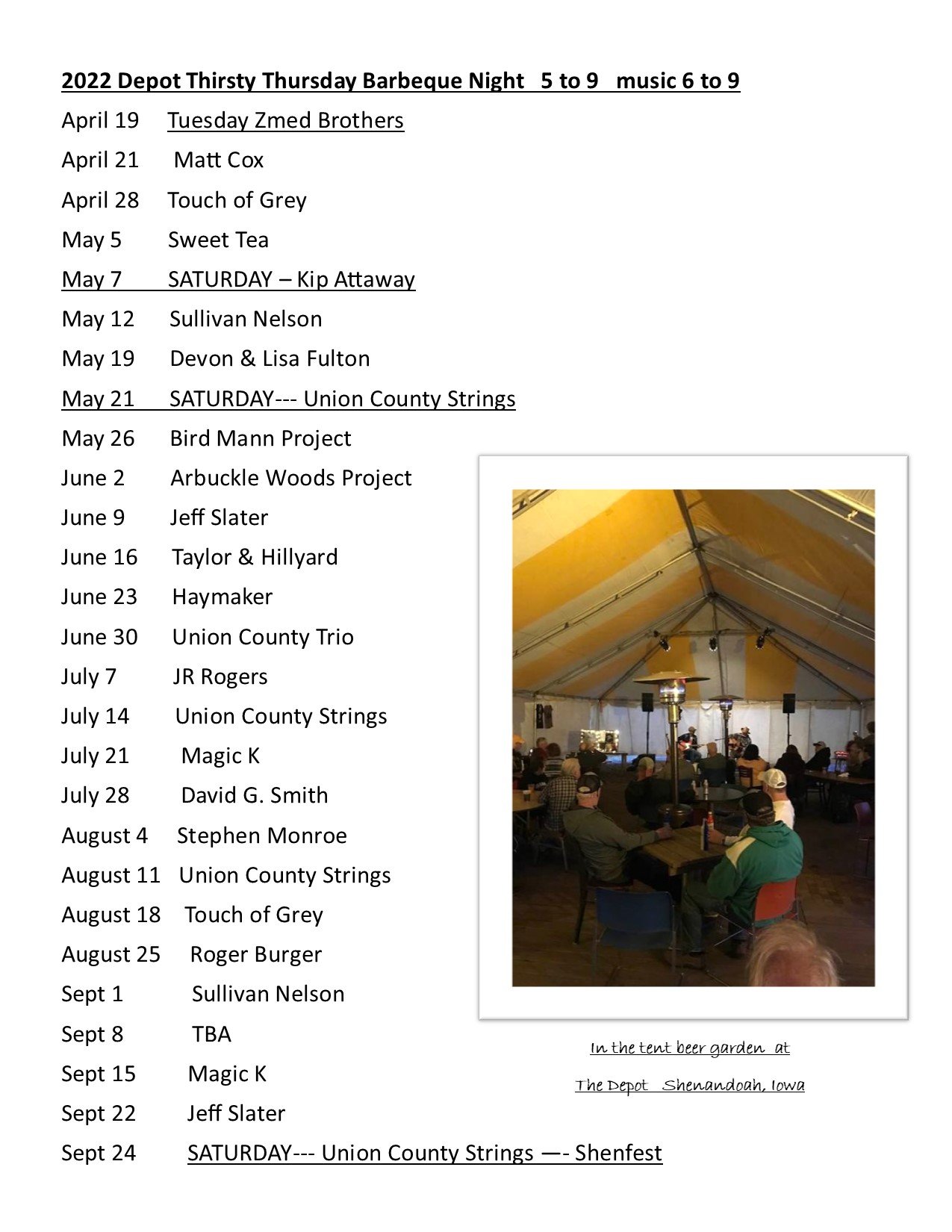 Music at Fridays After 5

It’s back for another year!

“We’re excited to sponsor the entertainment for a third year,” said Michael J. Bauer, president of First National Bank in Shenandoah. “We’ve added some new local artists this year including the high school group Gas & Grass to go along with our mainstays. We can’t thank the Elks enough for their hospitality. This event is such a great way to end the workweek.”

Music will begin shortly after 5 p.m. each Friday on the east lawn of the Elks and will wind down around 7 p.m. This is a family-friendly event. Kids are welcome.

Admission is $5 each Friday. But, the first 100 attendees (21 and over) will receive a free drink token and since First National Bank is paying for the entertainment, all gate admissions will go to local organizations for the betterment of Shenandoah. For the first week, all gate money will go to the Holly’s Hope, a non-profit dedicated to stopping domestic violence and helping women, men and children in Page, Fremont and Montgomery counties.

Jon Skillern and Duke Neumann with Shenandoah Elks Lodge have been instrumental in organizing this event dating back to the first year.

“If you came last year, you know this is a good time,” Skillern said. “If you haven’t attended yet, give it a try. We’ll have staff outside selling cold drinks. Come up after work, bring your friends and family and then go support local eateries.”

The artist lineup after Union County Strings includes Dustin Baird May 13, Jim Larson May 20, Gas & Grass with Jeff Slater May 27, Head Over Heels June 3, Roger Burger June 10, Union County Strings June 17 and Jeff Slater June 24. Skillern would like to remind everyone again that Fridays After Five is open to the public. You don’t have to be an Elks member to attend. 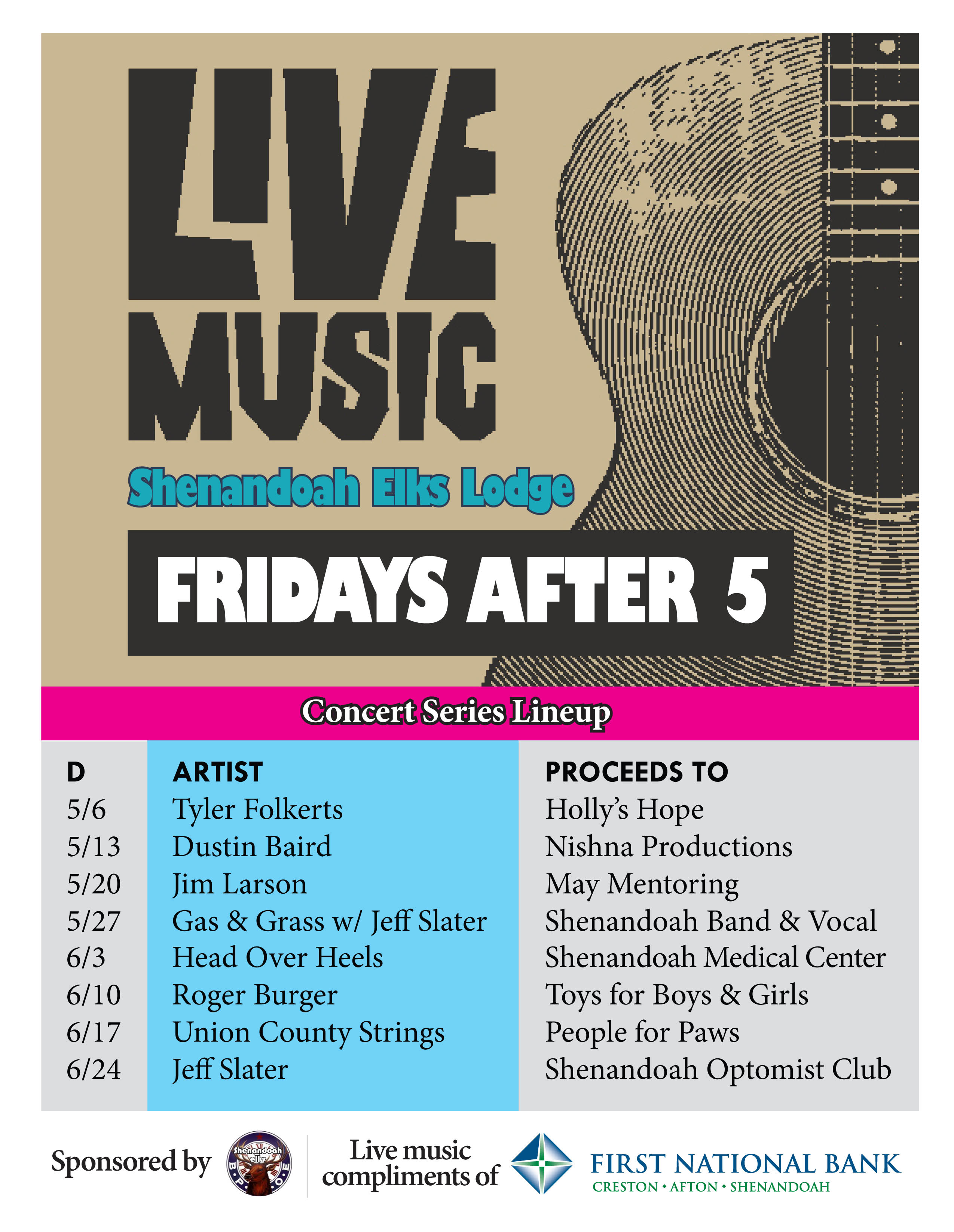 Community 1st Credit Union is excited to begin construction for a new branch facility in Shenandoah, IA very soon.  The new C1st Shenandoah branch will be located at 603 S. Fremont St., across the street from Walmart.  It will feature a 3,800 square foot building, multiple drive-up lanes, a drive-up ATM, and state-of-the-art features to best serve members and the Shenandoah community.  It is expected to open by the end of the year.

Place:  603 S. Fremont St. (located across the street from Walmart)

Join us for refreshments to celebrate! 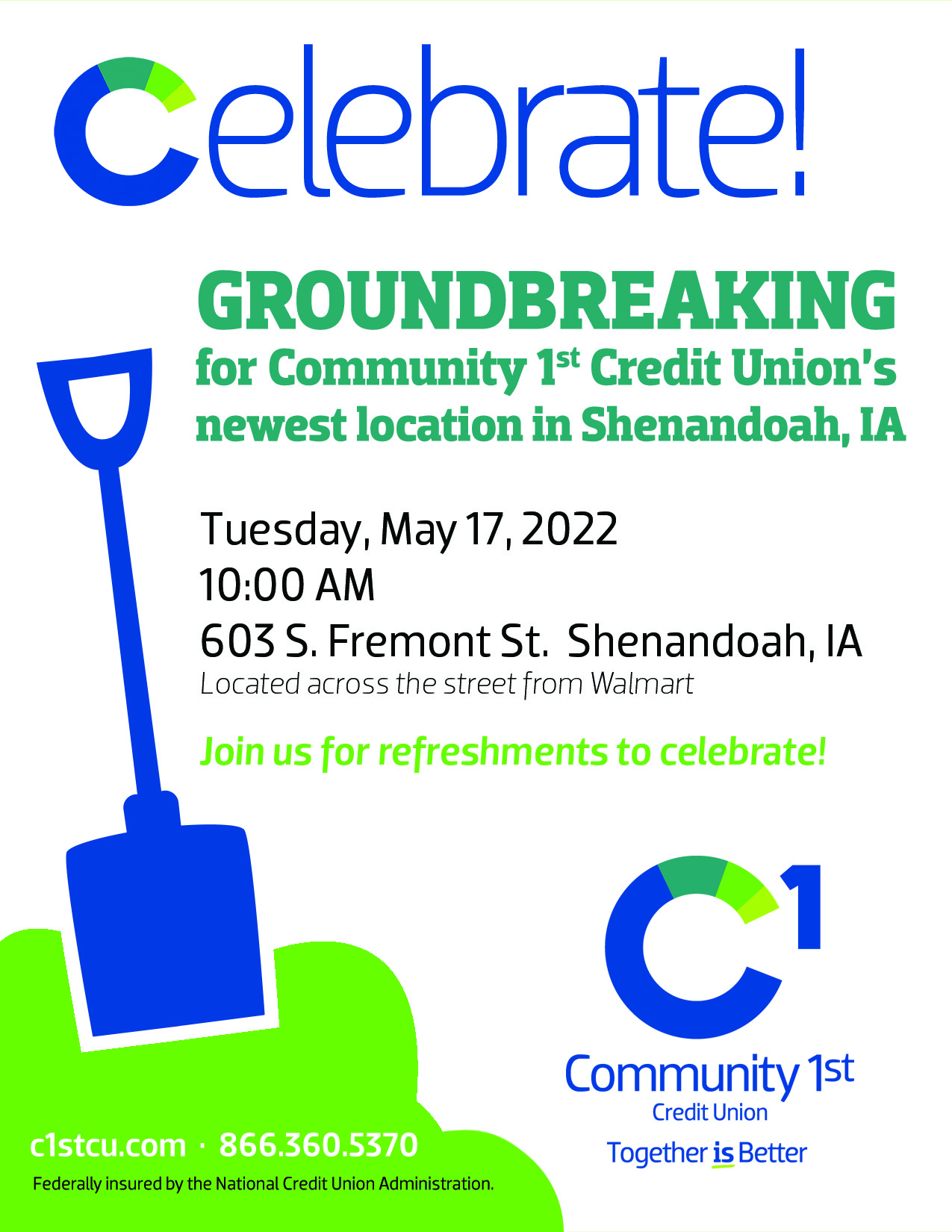 (Shenandoah) -- Officials from Green Plains, Inc. have announced plans for a $50 million expansion to its Shenandoah facility, adding 12 new jobs to the community.

During an earnings conference call for the first quarter of 2022, Green Plains President and CEO Todd Becker announced that the company has picked Shenandoah to be the first site for its Clean Sugar Technology. Patented by Fluid Quip Technologies -- which is owned by Green Plains -- CST produces low-cost dextrose and fructose through a dry milling technique and provides another product that can be produced by the existing facility.

"This will benefit the project development to make Shenandoah our first fully developed biorefinery platform of the future, complete with protein and sugar operations at a dry mill," said Becker. "This 30,000 bushel-per-day grind capacity glucose and dextrose system will be uniquely positioned to add significant value and demonstrate the possibilities for future development of this initiative."

Last month, the Iowa Economic Development authority announced that the project was awarded a $250,000 forgivable loan. Additionally, IEDA has agreed to give a rebate on sales tax for construction of the building and the Shenandoah Chamber and Industry Association is donating 25 acres of land for the expansion. Despite the incentives, Becker says it was the staff at the Shenandoah location that made it a prime location for the first Clean Sugar expansion.

"Shenandoah is really a special place," said Becker. "Obviously, it's one of our best and most profitable plants as a standalone plant. It's the first place we had high-protein and it's performing very well. It performs at-rate almost every operating day, and we see yields and proteins under our control amount in terms of pressing higher yields and managing our protein levels. So we've had a lot of learning there. We have a great operating staff that is really ready for new technologies now."

SCIA Executive Vice President Gregg Connell says the announcement is a positive one for the city and could lead to more projects associated with Clean Sugar Technology.

"We've got a great staff out here and the city has always been very supportive of Green Plains," said Connell. "This project will be about a $50 million construction project. There will be 12 jobs with it. We're obviously excited about that, but we're also very excited about the potential for downstream partners that would locate in Shenandoah and use products from the Clean Sugar Technology for additional products."

The expansion is just the latest addition to the facility since it first went online in 2007. In addition to producing ethanol, the facility produces a high-protein product that can be used in fish and other animal feed. Becker says Shenandoah is serving as a model of what the company hopes other campuses will look like.

"What we want to show is the future, and the future is going to be what Shenandoah will look like, which is a combination of all of the technologies and all of the IP that we have," said Becker. "There's also an opportunity for co-location as well. We've been talking to potential co-location partners of doing over-the-fence opportunities and Shenandoah is very unique from a workforce standpoint, as well as where it's located from a rail and a transport standpoint."

Connell says the growth and diversification by Green Plains shows the company's commitment to its Shenandoah location.

Plans currently call for the company to break ground on the expansion in late summer or early fall with the goal of being operational by the middle part of next year. 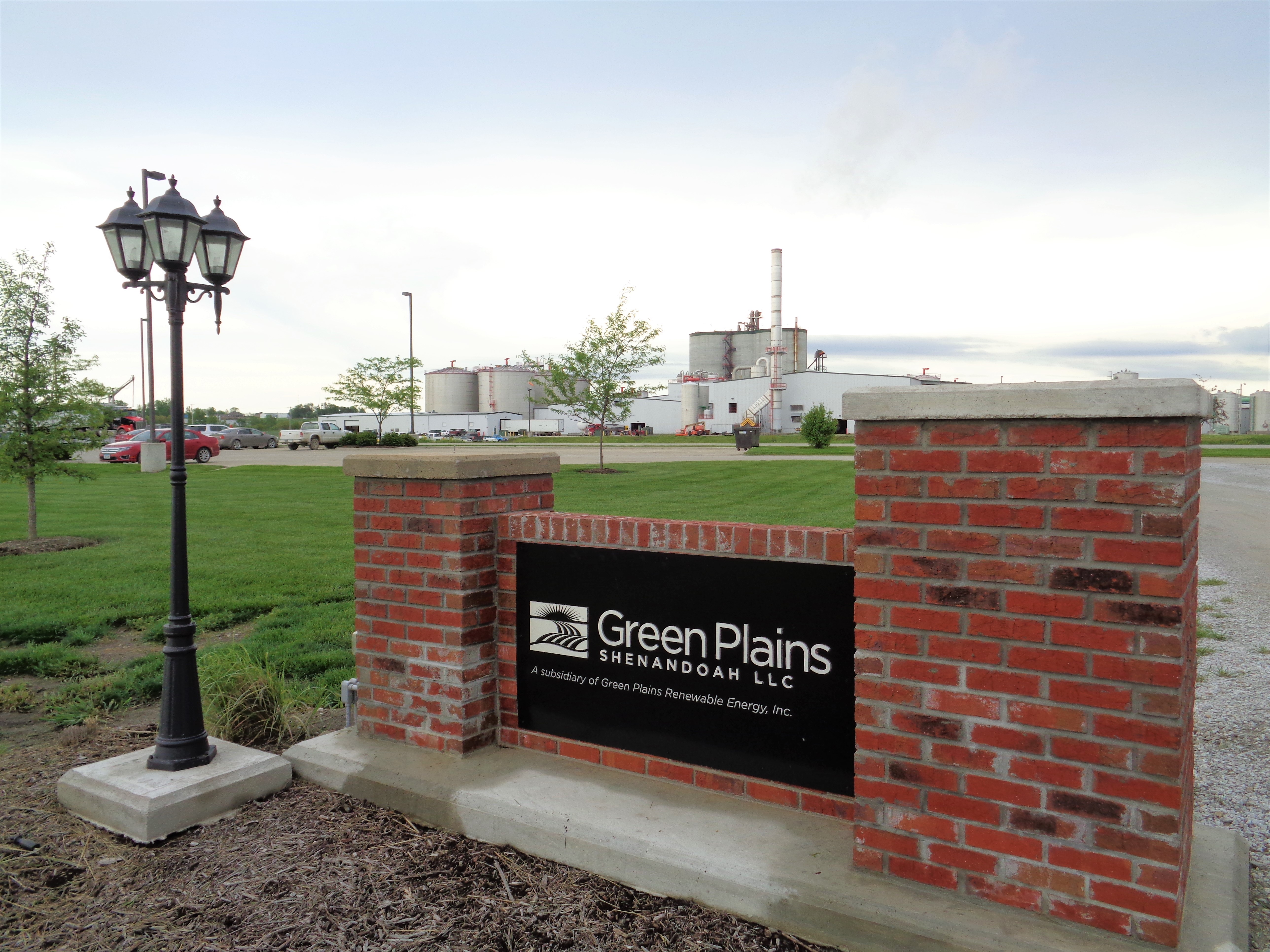 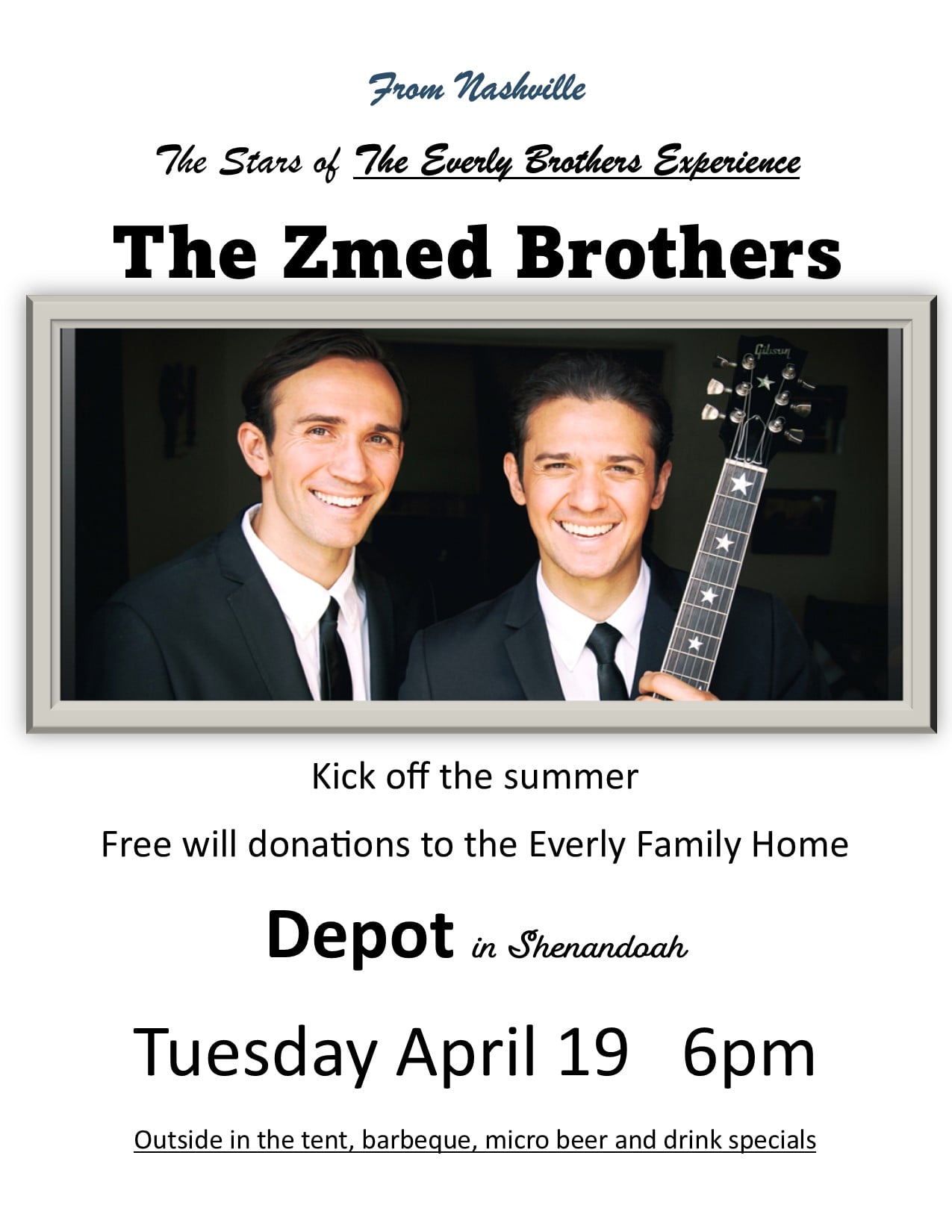